Skiing in Spain: the most typical dishes according to the area

Spending hours and hours descending the ski slopes is a great adrenaline rush for every skier, while using up a lot of energy. But for it, the snowy zones of all Spain invite us to recover forces with their most typical plates.

Here, we find the well-known stations of Baqueira, Masella or Vall de Núria, among others. The area’s most typical dishes are: olla aranesa, a soup made from beans, potatoes, noodles, vegetables, chicken, meatballs, black pudding and bones, and it warms you up in no time at all. There is also the trinxat de la Cerdanya, made from potato and cabbage, often accompanied with bacon, or the palpís de cordero, which is a boneless leg of lamb. And all accompanied by the best cured meats in the area.

Astún, Candanchú or Panticosa, are some of the stations in the area, which also offers high quality products requiring very elaborate cooking. There are very traditional dishes that were once prepared by shepherds decades ago and products that are still hand-made by craftsmen.

In addition to the famous Ternasco de Aragón (made from suckling lamb), we find typical vegetables such as cardoon; dishes with a long tradition such as Migas a la Pastora (made with bread, garlic and bacon), accompanied by cured meats such as longaniza and chorizo; chiretas (a round-shaped Aragonese faba bean) or tortetas (pork lard rings), as well as great-flavoured foods, such as the Barbastro pink tomato.

With such well-known stations as Leitariegos or Valgrande-Pajares, apart from the already known the cachopo (a filled breaded steak) and the fabada (bean and pork stew), this area has much more to offer. One example is the pixin, a type of monkfish typical of the area that can be fried, stewed, cooked in cider, etc. The scorpionfish cake is also traditionally eaten with corn tortos (a tortilla), made only with corn flour, salt and water and fried in olive oil, or oricios (sea urchin), which are eaten both raw and au gratin.

As part of their usual menu, the restaurants of the Iberian System, with stations such as Javalambre, Valdelinares or Valdezcaray, offer steaks and tenderloins of beef, kid and roast lamb, in caldereta (a stew) or in 'cuchifrito' (fried). These are the key dishes in this area, where the highly-appreciated thistle mushrooms, milk mushrooms and boletus edulis, appear spontaneously in the autumn.

This is also hunting and fishing country. Wild boar stew, roe deer sirloin and pickled partridge are highly prized dishes. As far as fishing is concerned, trout is the most outstanding dish, also pickled, fried with ham or in a sauce. And the migas serranas (a mountain dish of bread, garlic and bacon), or the beans with local sausage are also very appetizing dishes for warming you up.

With the Port of Navacerrada at its head, and other stations such as Valdesquí or La Pinilla, the central system is characterised by dishes made with beef or lamb as the star produce, as well as game meats and accompaniments based on mushrooms and other fungi.

This is a very austere cuisine, which combines meats roasted in a wood-fired oven and classic stews with legumes which are simmered over a low heat and to give them a great flavour.

With the well-known ski resort Sierra Nevada as its banner, the Penibetic System offers a cuisine with Arabic-Andalusian tradition. Rabbit with garlic, choto a la cortijera (kid cooked rustic-style), pickled partridge, pheasant with mushrooms or chicken alpujarreño (from the Alpujarras), are some of its typical dishes. Also very well-known are beans with ham, San Antón stew, Andalusian gazpacho, Sacromonte tortilla, gachas pimentoneras (dish made with flour, olive oil, salt, garlic and paprika) and migas. 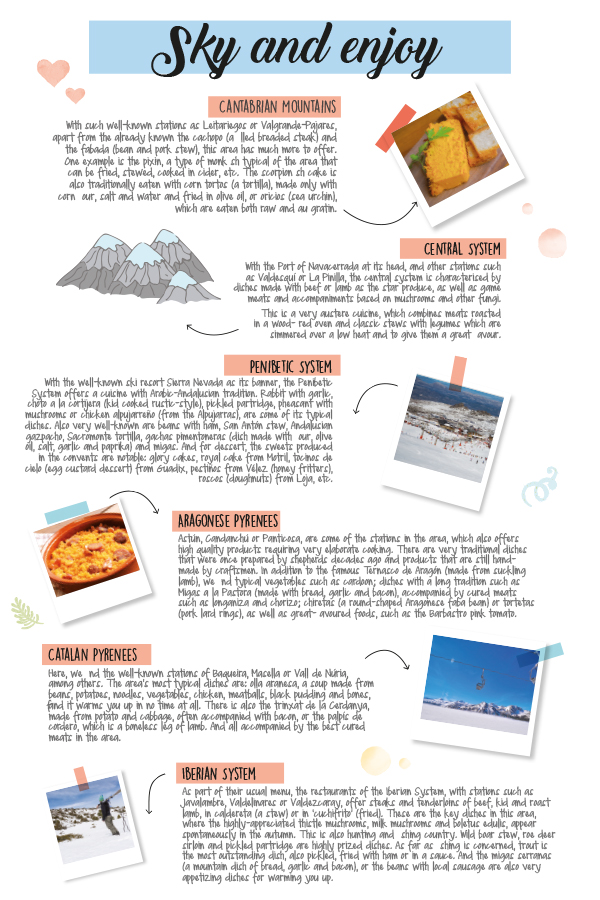