What to see in the Aran Valley

The Aran Valley is one of the most attractive areas of the Pyrenees. We tell you what to see, what to visit and the best things to do in the area, both in summer and in winter. Discover them!

What to do in the Aran Valley

Situated in the Pyrenean region of Catalonia, the Aran Valley is one of the areas that attract tourism throughout all seasons of the year as, depending on your interests, you can enjoy this region of the province of Lerida throughout the whole year.  If this region is notable for anything, it is for its picturesque villages. Visit these to discover their architecture and exquisite gastronomy. Spring and summer are the ideal seasons for rural tourism, for visiting the region’s wildlife parks, trekking along the paths and routes to discover the natural environment. There are also the snow and skiing activities during the winter, such as snow shoe trekking, dog sleds or snowmobiles.

Trips to take in the Aran Valley

Route of the Montgarri Sanctuary:

Route of the seven lakes in the Colomèrs cirque:

Route through the enchanted forest of Carlac:

Route along the valley towns:

Gastronomy in the Aran Valley

Gastronomy is another strong point of the area. This is based on the mountains, and has a Mediterranean influence. Aran cuisine leaves no-one indifferent. Soup and stew recipes are based on local produce such as mutton, beef, trout, mushrooms and cabbage, and these make up some of the most traditional dishes. But there are also recipes for duck, marinated game meats (known as civets) or pates which have a French influence.

Among the dishes you must try are the famous “Olhà Aranesa”, a hearty soup based on veal and pork; “caulets”, cabbage stuffed with meat; “l’hereginat”, a dish based on mutton giblets; “sanganhèta”, a recipe based on pig’s blood, pancetta, chopped garlic and parsley; “torrin”, a garlic and onion soup; “truhada”, potatoes stuffed with meat; and traditional desserts such as  “crespèths”, which are crepes combined with marmalade, honey or chocolate. 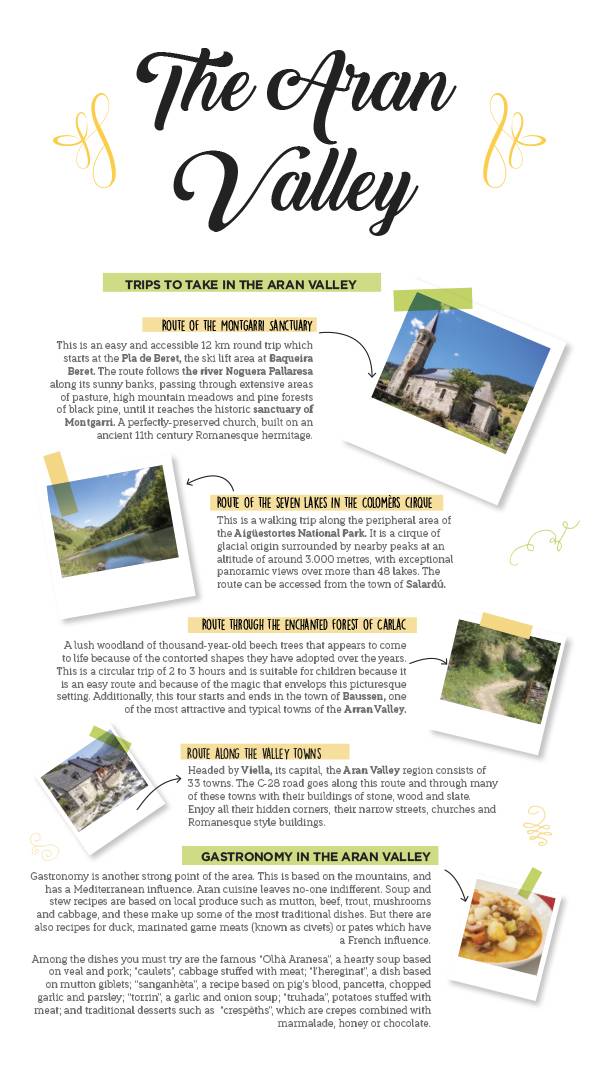